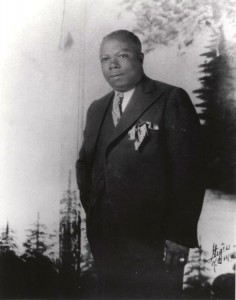 He led the Kansas City Orchestra, the most important of the itinerant, blues-based orchestras active in the Midwest in the 1920s, and helped to develop the riffing style that would come to define many of the 1930s Big Bands.

His first recordings were made in 1923, and were rather stiff interpretations of the New Orleans style of King Oliver and others. They also showed the influence of the Ragtime that was still popular in the area.

They next recorded in 1926 for Victor Records in New Jersey, and were influenced by the more sophisticate style of Fletcher Henderson.

The 10 legendary December 13,1932 recordings, made when the band were barely staving off literal starvation, show the Basie sound in embryo, four years before Basie recorded under his own name – in fact Moten does not even play on these sessions. By this time Ben Webster and Jimmy Rushing had also joined.

After Moten’s death in 1935 after an unsuccessful tonsillectomy, Basie took many of the leading musicians from the band to form his own orchestra.