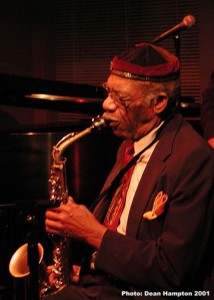 Kansas City saxophone player and jazz singer Eddie Saunders passed away on December 30, 2012. The late Lucky Wesley of The Scamps came up with Saunders and had described him as nice–naughty but nice. Saunders loved to sing and he loved to play, and he was proud of his Kansas City jazz heritage.
Jazz guitar player Charles Gatchet remembers that he had more belly laughs with Eddie Saunders than anybody else he knew.

Gatchet and Brian Morahan played with Saunders in the Blue Note Four in the late 1980s up until his health kept him from gigging. Morahan played drums for the group and gave the eulogy at Saunders’ funeral .

“I can hear one note of Eddie’s playing and know it’s Eddie,” says Morahan. “There was a shape to each note, it was sculptured…. Also when you listen to Eddie he’s talking on his tenor all the time. He’s always playing phrases and you know what he’s saying sort of.”

Eddie Saunders developed his jazz chops long before the Blue Note Four. His story starts with the old timers back in the ’30s and ’40s, who are becoming harder to find these days. He was part of the infamous Kansas City lot that came up in the Parade Park neighborhood, which includes 18th and Vine, 12 St, Euclid, and Highland. These are all streets that made up a neighborhood of jazz hot spots, the Mutual Musicians’ Foundation and other clubs. This area is also home to Lincoln High School. These were all places where Saunders spent a lot of time growing up.

Ben Webster, aka “The Brute” or “Frog,” an influential sax player, had moved to Kansas City and would pick up Saunders in his Lincoln convertible with his big black dog. They’d ride around all night while Saunders showed him the spots. He was just a teenager.

“You know he got to hang out with Ben, and in the morning he would drop him off in front of Lincoln High School,” Morahan recalls the story that Saunders had told him and laughs. “That’s how people learned.”

That was the scene in those days. Saunders was coming up after other Kansas City sax players like Charlie Parker and Lester Young. He was hanging out in the park on 29th and Paseo with Eddie “Cleanhead” Vinson, and running around with Lucky Wesley, Monny Nash and Luqman Hamza. They were all neighbors.

Luqman Hamza started the 4 Steps singing group, which later became the 5 Aces, when he was 12 years old. It imitated the sounds of the Ink Spots and other crossover R&B artists of the time.

Saunders, who loved to sing, wanted to be part of the group.

Saunders sang the bass in the 5 Aces and joined the musician’s union at the same time as Hamza.

Saunders went off to fight in the Korean War. Later, he ended up traveling the country with singer Lloyd Price and his band. Saunders played the saxophone in the hit Stagger Lee in 1957.

“Eddie told Lloyd Price he couldn’t sing and Lloyd Price fired him,” Hamza says. “Kind of rough to say something like that when you’re 1500 miles from home.”

Eddie Saunders’ life was music. In his later years he played with a lot of different groups based in Kansas City. Saunders used to say, “Music is the soul of the universe.”

He toured Europe and went around the country until he had a stroke at 72 that left him paralyzed on one side and made it hard for him to speak.

Saunders was laid to rest in Leavenworth National Cemetery.