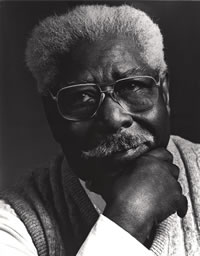 L.C. Huggins was born in 1913 in Fort Smith, Arkansas. His family later moved to Kansas City, Kansas, where he attended Northeast Junior High School. A self-taught tap dancer, when he graduated from the eigth grade in 1928 he was dancing in night clubs throughout the 18th and Vine district. In 1933, he performed on the opening night of the Cherry Blossom Club, one of the areas premier nightclubs.

His booking agent gave him the nickname “Speedy” for his slow, soft-shoe dance style and his relaxed pace. While the multi-talented dancer, drummer and singer never gained national fame, as did contemporaries Count Basie and Charlie Parker, Speedy Huggins was one of the most beloved musicians in Kansas City. Prior to his death at the age of 85 in 1999, he was a living legend, as well as a cherished Kansas City icon. He was one of the few jazzmen still working whose musical roots reached back to the heyday of Kansas City Jazz, when the 18th and Vine district boasted one of the liveliest music and nightclub scenes in the country.

Huggins performed throughout Europe while serving in the Army during World War II. After the war, he returned to Kansas City and enrolled in the Conservatory of Music at the University of Missouri – Kansas City in drum and percussion classes. An extensive period of touring then followed for Huggins. He danced primarily with the Three Clouds of Rhythm and played drums with other bands, including the Willie Rice Big Band. He played a one-week engagement in San Francisco with Ella Fitzgerald and was featured in the documentary film The Last of the Blue Devils.

Huggins remained active in music until the end of his life. In the 1980’s, he added singing to his repertoire of talents and played with Speedy Huggins and His Legends of Jazz and with The Scamps. An inveterate nighthawk – he was known as Kansas City’s “King of Nightlife” over the years – Huggins performed at virtually every local night club and jazz event, and at the innumerable jam sessions with practically every jazz and blues musician in Kansas City.
(Written by David Conrads)