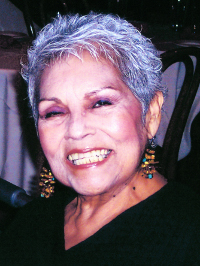 Jackie was born in Oakland, California and from the very beginning she was surrounded by music. Her father was a lead sax player and singer for an 18 piece Band in the Bay area. Her Grandmother played first-chair violin in the San Francisco Symphony and her mother was a singer. So, it was no wonder that at age of 4, she began singing. As a child she was able to go with her father to band rehearsals and performances. It was the best of times with floorshows at all the clubs, cigarette girls and all kinds of interesting people. She could soak-in the sights and sounds of great music and musicians at that time.

Jackie first visited Kansas City in the late 50’s and found there were good booking agents there. So, at 20 she returned to Kansas City to a career working 2 to 3 gigs per day. There were lots of clubs and amazing happenings going on every night – this encouraged her to work hard at her chosen profession. She loves playing clubs dates and has performed many casual engagements to include bandleader Tony DiPardo, a standard in Kansas City’s music scene.

Her first husband was Jerry Shaw who played piano in the Dorsey band and Jackie traveled and sang with them. She also had the pleasure to sing with the Original Legends of Jazz featuring Sam Johnson, Sr., L.C. “Speedy”Huggins, Franz Bruce and Elbert “Coots” Dye. Her late husband pianist and trumpeter Bernard “Step-Buddy”Anderson, played with Jay McShann, Miles Davis and Charlie Parker. She learned so much from Step-Buddy because he was one of the best and came to Kansas City in the early 1950’s after Miles Davis replaced him in Quincy Jones’ orchestra on trumpet, after an illness.

Jackie’s favorite song is You’ll Never Know. She was inducted into the Elder Statesmen of Kansas City Jazz in 1991.