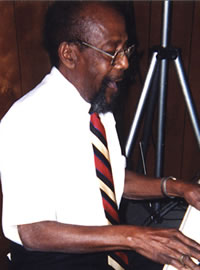 Oliver Todd was a band leader and trumpet player. He was born in Kansas City in 1916, and was one the city’s most famous band leaders. He lead a band known as the Hottentots which included at various times Tiny Davies (trumpet) formerly with the International Sweethearts of Rhythm, Gene Ramey (string bass), Winston Williams (string bass), Bill Graham (alto sax) and later with Count Basie and Duke Ellington. He also was a friend of Charlie Parker. In 1992, he won the Kansas City Jazz Heritage Award. Oliver also was the leader of the Kansas City Jazz Septet + One, which, as it turns out, was the last band he played in before passing away.

After his death in 2001, he was for some time interred in an unmarked grave until The Coda Jazz Fund paid for a headstone for him.

Oliver Todd was remembered by a local musician, Luqman Hamza, who first played with Todd in 1951, said he always looked up to the man.

“He was a mentor to many, many Kansas City musicians,” Hamza said. “He had a large repertoire in his head, and he could read an audience, play whatever it took to get them going. People may have come into a club feeling down, but when he was playing they left feeling alive.”

Hamza recalled one of the first times he played music with Todd and being transfixed by his light baritone voice. “He was singing ‘I’ve had my moments, I must confess. My fleeting moments of tenderness,’ “Hamza sang, softly, before Todd’s ceremony. “He could sing anything.”